Sierra and her Christmas Tree

Our plan to get a Christmas tree this year started a few months ago but to save you the long story, here is the short one...  A few years ago, we were thinking of getting a 2nd dog to keep our current dog, Sierra, company while we were at work during the day.  A friend of ours had used Lydia Hiby http://www.lydiahiby.com/ to "communicate" with her horse.  We decided to spend the $40 to give this a shot and have her talk to Sierra and see if Sierra wanted a dog.  The deal is, you send her $40 and call her a week later to see what your animal has to say.  As you can expect, I was highly skeptical of this.  I've sat in on psychic readings and don't believe in them.  I've never believed in horoscopes.  This is not my deal but it was worth the $40 just to see what would happen.

Well, Lydia came back with some information from Sierra that was way too specific and accurate.  Remember, we simply sent her $40 by mail.  That was it.  No additional information at all.  What we wanted to know was if Sierra wanted another dog in the house but we did not tell her that.  Well, the first thing Lydia tells us is "Sierra thinks you are looking at getting another dog and she wants to tell you she likes being the only one."  This is followed up with a handful of other statements that are very specific.  It got me wondering if there is something to this "Dog Whisperer" after all.

Jump forward 2 years.  A few months ago, Sierra was in a cycle where she was not feeling well or acting herself and it had been going on for a while.  $40 later, we have a 2nd conversation with Lydia.  We find out Sierra has a yeast infection (something the vet did not diagnose).  However, Sierra had more to say this time...  In addition to some "comments" about her general health and her stiff joints (she is 9 years old), she told Lydia that Sierra really liked it when we get a real Christmas tree.  Apparently, Sierra likes the smell of real pine in the house.  Lydia was a bit embarrassed in passing this information on to us and explained that she had never heard a request like this from an animal before.  She went on to say that a few years ago, we got a real tree and Sierra really liked that.  The next year, we did not get a tree and Sierra did not like that.  Sierra was hoping for a real tree this year.

This was totally accurate.  We did have a real tree 2 years prior but did not get one the following year since we were going to be out of town over Christmas.  Remember, Lydia get NO information from us other than $40 and can figure out our town by the return address on the check.  Lydia lives in California.  We have never met her.    Apparently, our dog likes to talk to her...

So, here we are 2 days after Thanksgiving and we just put up our real Christmas tree.  For the dog.  I hope she likes it. 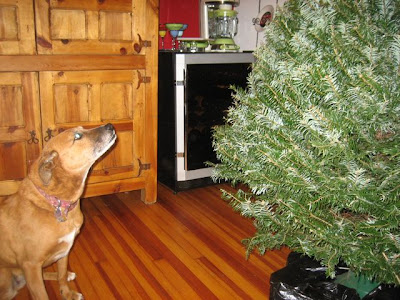