Recently, I read a well researched post written by a friend of mine about building the perfect high-tech home gym. What I found was most of those cool tech gadgets he discussed were aimed at the Apple iOS ecosystem. As a long time Android user, I started looking for options for us.

Since my preferred activity for exercise (at least in the summer) is road biking, this is where I started my search.

I already have a Garmin Edge 305 bike computer. I've had it for years and it works great (after soldering the battery to the motherboard - a common problem related to vibration). However, I always ride with my Android phone and I figured there had to be some better solutions out there, or at least complimentary ones.

What I wanted was to turn my phone into a bike computer and allow the ability to upload to Strava (which I am beginning to get addicted to), look at maps, follow routes, etc. Stuff we should expect to do on a bike computer.

I found this was not as easy as I thought it was going to be.  Since I already owned a Garmin computer, I already had ANT+ devices mounted to my bike for speed and cadence as well as heart rate.  I wanted to capture that data, not mount more stuff to me and my bike.

If you are lucky enough to own certain Sony phones, you have ANT+ built in.  I currently carry a Samsung Galaxy S4 so no dice for me.  Solution?  A somewhat cludgey but perfectly working ANT+ USB adapter that plugs into my phones micro USB port.  I bought mine from Selfloops.com  They make a stand alone version or the version that also contains a battery pack. In hindsight, going with the battery pack option might have been smarter.

Once this arrived in the mail, I downloaded some required (and free) software from the Android Play Store. The required apps include:


Then I had to choose my software for the bike computer option. This is where I began to see how the iOS applications really stood out. They are beautiful compared to the Android options.  However, I am more interested in capturing metrics and data than pretty interfaces.

I ended up choosing IpBike ANT+ as my computer. There is a free version (limited to 1 million wheel rotations) for you to test. It also requires a free plugin allowing it to talk to all the ANT+ stuff.

Once all this was installed, I headed out to the bike and fired it up. This software captures everything! It takes some time to set it up (bike size, wheel size, bike weight, your information, etc).  You can save multiple bikes in the software so if you ride more than one, switching is easy.

There are unlimited screens and unlimited data you can track. I've been riding with it for a couple weeks and I'm still tweaking my settings to get my data where I want it - but anything is possible.  I'll need to write a separate article on just this software. 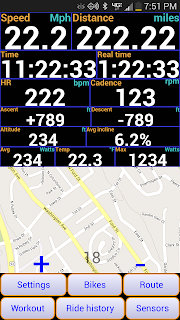 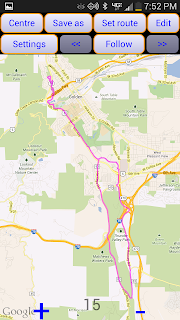 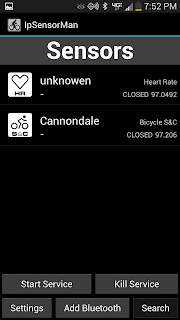 Now, I needed a way to attach the phone to my bike.  I hit Google and started searching for handlebar mounts for phones.  Lots of options.  Most suck.  I started with a RokForm case. Loved every aspect of it except the fact it will not work with all carbon fiber bikes.  The fork / handlebar stay is not designed for this kind of mount.  I found that out after really messing up my fork and bearings.

I am now trying the Quad Lock bike mount. This uses zip ties (no damage) and will mount in various locations. Still not perfect but I think it will do the trick.  I do like the fact I can see my bike computer, see the Strava application while I ride and listen to music through the phone speakers and not through in-ear headset that limits my ability to hear traffic, etc.

If you have found other software applications or bike mounting options, please drop a comment and let us all know what is working for you!
Posted by Admin at 4:37 PM